The following take from this Grateful Dead concert comes via Dead Listening.

“This show is featured almost in its entirety on Dick’s Picks Vol. 20. But it has history from long before it came out commercially, and that history is in part related to demonstrating the glory of AUD recordings from a part of a year that isn’t famous for its soundboards. Most of the SBDs from Fall 1976 fall a bit flat. They just lack a lot of sparkle. As we have been dabbling into this period with AUD tapes, there are a fair number of good ones to be found, and it is now time to add 09/28/76 to this list as one of the more satisfying 1976 AUDs. Very up front, with exceptional low end, this tape permeates the sound field with the power of the Dead’s new (in ’76) sound system. Particularly sweet are the sound of the kick drums and Phil’s bass. These instruments tend to lay very flat on the SBD’s, while in the AUDs you can literally touch the energy coming out of them. The drums, especially, pulse with power. You can almost feel the push on the air, absent almost completely from the soundboards. On 09/28 we are thus treated to that most wonderful alignment of the stars – a wonderful recording of a wonderful performance. 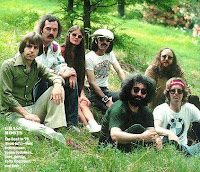 It’s hard not to talk about 1976 without mentioning the dismissing the year gets in many Dead trading circles. Generally you either love 1976, or absolutely don’t. However, even some of the most anti-76 folks out there will generally acquiesce that there are a few glowing spots in this year. 09/28/76 falls into this category easily. In fact, after revisiting this AUD after a good many years myself, I regret that it took me so long to share it here on the blog. This show and recording demonstrate all that I love about 1976, and then some. It was one of the first late-1976 tapes I acquired in trade, and as an AUD, continued to cement my preference for this recording medium over soundboards. For this show, and a few others from the Fall of ’76, the audience tape brings an entirely heightened level of experience to the music itself – not because of the crowd, or the energy in the air, but strictly based on the way the sound of the band comes through on tape.

After a first set that contains some fine songs including Candyman and Friend Of The Devil, the set closes with a herculean Let It Grow>Goin’ Down The Road Feelin’ Bad. This song pairing only occurred twice – the first being on 10/25/73. The Let It Grow displays a rather ferocious intent to grab the audience’s attention, elevating the overall energy of the first set by leaps and bounds. The solo sections sizzle in and out of verses, and the transition over to GDTRFB is quite extended. Things idle with a raw potency between songs, cascading over a large extended peak while the music finds its own path from song to song. But, make no mistake, set two of this show trumps nearly everything that has occurred on the entire tour thus far. This is music that can leave you changed after listening.

First and foremost we have one of those second sets that looks frightfully good on paper. One complete jam:

If the music therein could even come close to being as impressive as the set list, we’re in for a good time. What we get is far more.

Playin’ In The Band launches the second set directly into your heart, exhibiting the quintessential quality of 1976’s deeply psychedelic-mellow vibe. It’s the sort of energy and music that you could completely miss if you don’t fix both eyes (or ears) upon it – like thinking nothing of walking past an everyday looking patch of flowers only to double-take when you catch the fact that the rich colors of the flowers are somehow flowing from one to another the way light reflects off a huge school of phosphorescent fish as they turn and swirl, as if driven by one mind. 1976 has a lot of this kind of stuff going on. 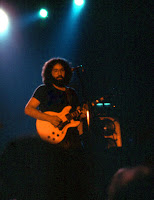 Playin’ moves in a slow watery boil. Garcia pulls out lead lines like fingers pulling honey from a jar. Everything breathes together. There is a point where you can sense The Wheel coming from a thousand miles away. Like pre-dawn light in the eastern sky, it barely kisses the swirling darkness of the Playin’ jam. Eventually, The Wheel hint cracks the horizon and begins filling the sky with a throbbing rainbow sun, each solar flare a different color bleeding into the next.

If we give 1975 the credit it truly deserves for bringing us Help>Slip>Franklin’s, rather than attributing it to 1976 when it merely exploded forever into our vernacular as a Dead classic, then The Wheel is ‘76’s crowning jewel – the greatest gift to us of the entire year. In that, it encapsulates 1976 completely. The way it could form out of a jam (on 9/28 perhaps even more artfully that it does on 10/10/76), somehow demonstrates how the song’s musical arrangement in 1976 was written out of the sheer fabric of the band itself. Simply put, it fills your soul. It seems like nothing more than a “good song.” But placed correctly, it elevates you. It draws you into that distraction-free experience of the Now that is typically reserved as the ability of a deep jam only. The Wheel in 1976 just has this power. The Wheel on this night might easily claim the title of best of the year. As if the song itself wasn’t potent enough to lay this claim, it’s exquisite intro from Playin’ and outro into Samson and Delilah assure it.

And Samson itself is elevated by the seamless transition. The song cooks. But it’s the jam that returns directly off of Samson’s final downbeat that begins to cement this set as one for the ages. We are placed directly back into the night-mist fabric of Playin’ In The Band without transition. It just rushes forward again and silences the crowd which had been brought to its rowdiest level by the previous song. The Dead demonstrate their complete control of the proceedings with this shift. The next few minutes of music are picture perfect – the kind of stuff that could only appear like this, pure inspiration and improvisation tucked deep in a long string of music. Jerry is whipping out lead lines now in his classic swooping birdlike arcs. There is no resistance to the fusing together of everyone in the building. The band’s singularity of being suffuses the crowd – all hearts beat as one. As if this wasn’t elevating enough, next comes a song that could deliver prayer-like spiritual oneness in almost any year: Comes A Time.

It’s arrival is like emerging from a dense forest into a wide valley of grassy hills under a sunlit sky tinged with the smell of Spring. And as is often the case, this song brings out the best in Garcia. His voice – its inflection, emotion, and pure intoxication – is matched only by his guitar work. Man, to hear Jerry and Donna repeat the final sets of the line “only love can fill” sends chills down my spine – absolutely riveting. This section is like almost nothing else, somehow far more than you’d ever expect it to be. The exit solo is short and sweet, and it ends with the band seeming to search for the next step. Drums to the rescue, we get treated to the awesome power of Billy and Micky.

Here you can completely appreciate the already wonderful audience recording all the more. 1976 Drums on a soundboard never sound this energetic. Proving that fact, there is a tape flip covered by the SBD itself for about 15 seconds. You can completely hear what is lost in the SBD. The AUD returns for the last few minutes of Drums and we are headed for more glorious music.

Eyes Of The World charges at breakneck speed. This is a supercharged version of the song, and the music sets off an effervescence of stars appearing and burning out all around you. The speed of the song propels Jerry’s solo work into heavenly realms. His leads manage to float lazily above the locomotive pace of the music beneath them, gently singing and dancing. This is a 1976 Eyes through and through; not better or worse than those of 73-74. It brings about those involuntary smiles throughout. At the end, the song angles sharply back into the Playin’ jam, but only for a moment. Quickly, the band finds itself in a unique thematic jam that walks a line between loping and stomping. It’s slightly Bolero-like – something not quite heard before or after this show. It goes on for a nice while, and then Phil starts hinting back at Playin’. But Jerry has another idea.

As if this colossal complete set long jam wasn’t big enough already, the band heads into Dancin’ In The Streets. This late in the year (about four months after the song’s re-introduction to the lineup), the song has fully matured, each musical part integrating perfectly with the other. The crowd becomes fully locked in, clapping along. Yet, the music is so loud, when the band starts jamming, you can’t hear the claps – another great example of the music’s power and energy. The jam dances along (no pun intended), resolving in a near perfect run through of the syncopated end refrain. This leads to the final verse which fades itself to a whisper, upon which Playin’ finally makes it’s true return (after, what? Four teases throughout the whole set?).

The band takes some pleasant time letting the jam float about the arena. Slowly the entire band simmers all the way down and lets the reprise fully take form. Ecstatic, the crowd bursts into cheers as the song draws to its close.

When listening to the audience recording, this set easily defies all negative connotations cast at 1976. This is the Dead firing on all cylinders. Enjoy.”

Listen to the set below. Filter through the songs using the forward button.